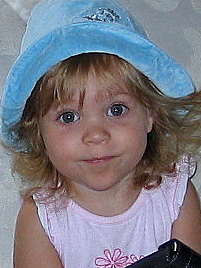 Because of your child's desire to assert his

independence, these years are often called

"The Terrible Two's"!  If you realize the huge

that you child is going through, you are better

able to understand and usually feel a little

independence in their two favorite words:

the place--crying one minute and laughing the

They are more sure of themselves in many ways

and love to explore their surroundings.

They are a bundle of energy and love

* has a vocabulary of several hundred words

* refers to them self by name

* can sort by shape and color

* can do simple puzzles

* can be shy around strangers

* insists on doing things by herself

* drinks from a straw

* feeds herself with help

* can roll or toss a ball

* can build a tower of three to four blocks

* begins to be able to walk backwards