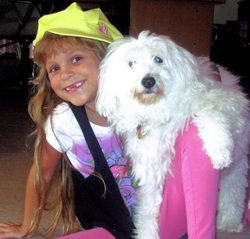 knowledge with you!  They are curious about

and, at times, will surprise you!


Although they ask more complex questions

and express their ideas more openly, they can

being corrected or criticized.  Give them

praise when they think outside of the box and

express their opinions!  Encourage them to ask


Their increased reading skills open up a whole

new world to them!  At this age, their self

They often take physical activities such as

They master body movements and have an

of these skills go hand in hand with challenging

themselves in areas that they love, from skating

to karate to playing the piano. This is a great

time to support their interests by getting them


With their expanding personal awareness, they

will begin to talk more about "what they want to

be"  and begin to have"idols".  They are able to


They evaluate who they are according to how

they come across to others.  They're more willing

to listen to advice, which helps them become less

argumentative!  They are able to see another

person's perspective and are more flexible

They also enjoy imitating them!  Their empathy

for others strengthens as well as their ability to

stand up for themselves.  This ability to stand

behind who they are enables them to compare

themselves to others.  They like to see if other

people are "better" or "different" from them.

They look for the why and how but really don't


At this age, they don't hesitate to argue with

their friends if they don't agree!  Although

they are increasing their social skills, keep an

eye out for some of the cruel behavior that can

occur.  Their sense of inner justice can get a bit


They will develop a "best friend" at this age and

that friendship.  They may call a few children

"best friends" but this will narrow down by the

time that they are eight years old.

"Belonging" becomes important to them.

Calling friends on the phone and emailing are a

If they aren't already involved in scouts or sports

teams, it's  a good time to help them increase

their social group in a more structured way.


Their ability to understand the feelings and

perspectives of others increases and helps

on the amount of physical activity they get!

Children who are sedentary will not mature

as quickly as those who are more involved in

dance, sporting activities or even playing in

the backyard! The more interaction with peers,

the more the social skills will develop.

confident about being in school.

With a few years of school under

their belt, they know what to expect!

Not everyone is their best friend as

they were in first grade!  Their

differences in others makes them

more selective about who they want

to spend their time with!


This is the year when they begin to

people who are outside of their

Rules and the consequences of

teacher will be consistent and

important for you to do the same!

It's also a good time to take

advantage of this age of "rule

clarity" and realize of the advantage

of your child learning the importance

of following the rules and doing the

right thing! The more they are aware

of rules and consequences and know

that you mean what you say, the

better! Waiting until they are older

and expecting them to listen will

become much bigger problems for


If you've been sitting with them

while they do their homework,

now is the time to wean yourself

to begin to develop more

independence in that area and

These skills are expected by the

time they are in third grade so it's

a good idea to help them with this.


Enjoy this year of growth in so many

areas!  Yes, much of the

innocence of the earlier years is

gone, but there is so much

wonderment at this age that it feels