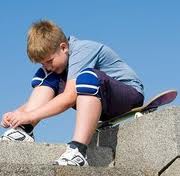 PARENT QUESTION: So I have
a question. We're walking
homefrom school and my
oldest has to tie his shoe. He
takes forever to tie it, I mean forever. Every time I ask him
he says he forgot and had to
think about it, but when is to
go somewhere he really wants to be at they can
be tied in like 3 seconds. What would you
suggest; I'm at a loss as to why.

ANSWER: He does it for power and control.
It’s not that he doesn’t know how to do it
quickly, as you said!  He just wants to make
it all about him!  He wants everything to stop
and everyone to wait while he takes his good
old time at it.

I would tell him that you are tired of him
wasting everyone’s time.  For every minute
that it takes him to tie his shoe, he loses 10
minutes of TV time.  Let him know that
before he goes to school and suggest that he
makes sure his shoes are tied before he leaves
the building and if he thinks they are lose to
re tie them before he leaves school.  Now he
may test you on this to see if you mean it, so
stick to what you say and follow through with
losing TV time.  He probably won’t do it more
than once!
Let me know if you still have problems and
I’ll give you some more ideas!