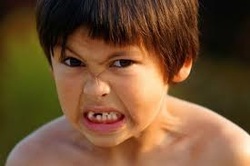 PARENT QUESTION:  I need to get my 7 year old son to listen.  It’s a big issue at home and at school.

ANSWER:  The bottom line here is that kids don’t feel like they have to bother listening when they get so many chances!  It’s almost like the “One, two, three” counting that to me teaches kids, “Ignore them on one, ignore them on two and maybe start moving when they get to three!”  That counting works initially because kids don’t know what will happen.  Soon they realize they can push the limits and nothing will happen so they start ignoring you.

Kids really love being in control and when they hear the parent asking and they know that they can ignore them and nothing will happen, they sit back and let parents ask over and over.  By the fifth or sixth time they hear their parents get angry or scream so then they listen.

I know you want the listening to happen by the first, no more than the second time.  What you have to do is, SAY IT!  MEAN IT!  FOLLOW THROUGH!

That means that you tell him it’s time to brush his teeth. If he is busy, tell him that he needs to stop in five minutes and it will be time to brush his teeth.  You may want to put a timer on.  It’s good to give a five minute warning. When you tell him it’s time and he doesn’t move, escort him where you want him to go.  If he’s watching TV, turn it off. If he’s playing, take the toy out of his hand.  If he’s coloring, remove the crayons, etc.  Then say, “Mommy called you to brush your teeth.  You need to listen.”  Do this with a firm but monotone voice.  Firm means you’re serious and monotone is showing him that he is not getting an angry or frustrated reaction from you.  When kids get the reaction, they like it!  It gives them the feeling of power seeing that they can control your emotions.  So don’t give that pleasure by reacting!  Don’t escort them with any more conversation than what you said in the first place.  Don’t make comment about listening the first time, and on and on.  All that does is get the reaction that he wanted!  Don’t make comments when he says “I can’t”.  You know he CAN so there is no reason to say anything. He’s doing it for a reaction and he’s getting it.  Just take that reaction away. The less talking and less looking at him, the better!  When you talk a lot or repeat yourself that just gives attention to the “ignoring you” behavior!  After a few days of this, most kids begin to listen.

If you don’t feel progress then give consequences that are related to the time and or activity.  For example, if he brushes his teeth and maybe gets to play a game with you before bed and story time, then not brushing his teeth or taking too long loses the game or TV time or whatever happens before bed.  (I would never take away the story time though.) If you have to rework things, then you may want the teeth brushing earlier so that there can still be “awake” time to use for consequences.

If he refuses to get dressed and it’s time to leave for school or camp then take him in his pajamas!  At his age, it usually is embarrassing to walk into school that way.  Put the clothes in a bag and take them with you. Ninety nine percent of the time kid’s panic by the time you’re getting into car pool line realizing that you’re serious.  Get out of the line and park the car.  Tell him to get dressed and just don’t talk or look at him. In most cases, the problem is solved.  The following day, he knows that you mean it.  Let him know that you will not get out of the car pool line again and that he will go into class with pajamas on.  One time usually does the trick. Just send a note to his teacher and the clothes in his backpack.

The more he sees that you mean what you say, the less he’ll feel that he has the control.

I would work very hard on this to get that behavior to change. With your husband deploying soon you want to get this under control! Hope this helps you!